They’re so thick and bushy you can run around nude in your backyard!

Chris, the Tutu Garden Guru, and his ex-partner Marie spent a couple of days in 1999 looking at gardens in Hollywood and Beverly Hills. They saw magnificent tall narrow screens and hedges of Lilly Pilly. The Lilly Pillys were closely clipped, very dense, and covered in fine, bright red new growth, they looked very classy and provided absolute privacy. When Chris got back to Australia he started looking for varieties of Lilly Pilly that would be suitable for this type of hedging. The criteria were that it must be fast-growing, clip well, have dense, dark green foliage, and nice bronze/red new growth. It must also be resistant to Psyllid attack which causes little blisters on the newly formed leaves.

When Chris was visiting one of our best growers in QLD, a man named Griff, he had a field of just the right strain of Lilly Pilly. Chris asked Griff about his Lilly Pillys and in Griffs southern drawl he said “I call these my ‘neighbours be-gone trees’, you plant them in a row along the back fence, they grow really quick, very bushy, and in a flash, the neighbours be gone and you can run around in the nude and do whatever you want in your backyard. In fact, they are so thick and bushy, you can’t even hear your neighbour’s dog barking through them!” “Really?” asked Chris and Griff replied, “No, but it’s a great story.” Chris wrote this story on his website and it became one of the most popular stories on the web.

They grow in full sun through to light shade and withstand mild frost, wind, heat and drought. They thrive in almost any soil including heavy wet and occasionally waterlogged soils.

Plant your trees at a 1 metre spacing, keep free of grass and weeds around base and fertilise regularly and irrigate when dry. Psyllids are the only pest that attack Lilly Pilly. Fortunately, the Neighbours-Be-Gone Tree is a resistant strain, when grown in the right conditions and maintained properly. Psyllids cause little pimple-like blisters on the newly formed leaves, and the damage they cause is usually only cosmetic. Spray with foliant if attacks occur. Generally, if you keep your Neighbours-Be-Gone hedge healthy, it generally won’t suffer attacks. 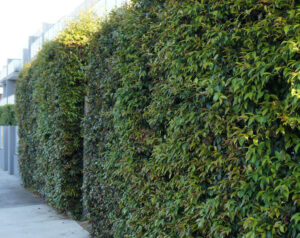 Neighbours-Be-Gone Trees can be used to create tall screens, large hedges, and large topiary. They can be planted in pots or confined areas. Although they have the potential to grow into large trees, their size can be contained by regular clipping. The trunk and roots only grow to serve the needs of the crown of the tree, so the trunk and root system will remain small, while the tree is being kept small by regular trimming. Neighbours-Be-Gone Trees are long-living trees that don’t become woody or sick from long-term regular pruning. A well-maintained Neighbours-Be-Gone Tree hedge or topiary can last for many decades.

One particular hedge located just off Melrose Ave caught Chris’s eye. He decided that he must shoot some footage of this hedge and bring it home to Australia to create a Neighbours-Be-Gone Trees Acmena Smithii TV ad. George, a friend of Chris and Marie’s, who is involved in community projects with underprivileged youths, directed them to a Cameraman by the name of Dan who films documentaries for a living. They asked Dan if he would help them to shoot their Neighbours-Be-Gone Trees Acmena Smithii TV ad and Dan agreed. When Chris was driving around LA discussing and looking at which Neighbours-Be-Gone Trees to shoot for their TV ad Marie was concerned that Chris was going to be arrested. All of the homes in Beverly Hills are protected by security response and armed guards, you can imagine people’s surprise when Chris knocked on their doors asking them if they would mind if he could run around nude behind their Neighbours-Be-Gone Trees!!

Chris filmed the hedge of a lovely South African woman, who told Chris that she really loved her hedge because it gave her good privacy and she couldn’t understand why everyone in LA didn’t have one!